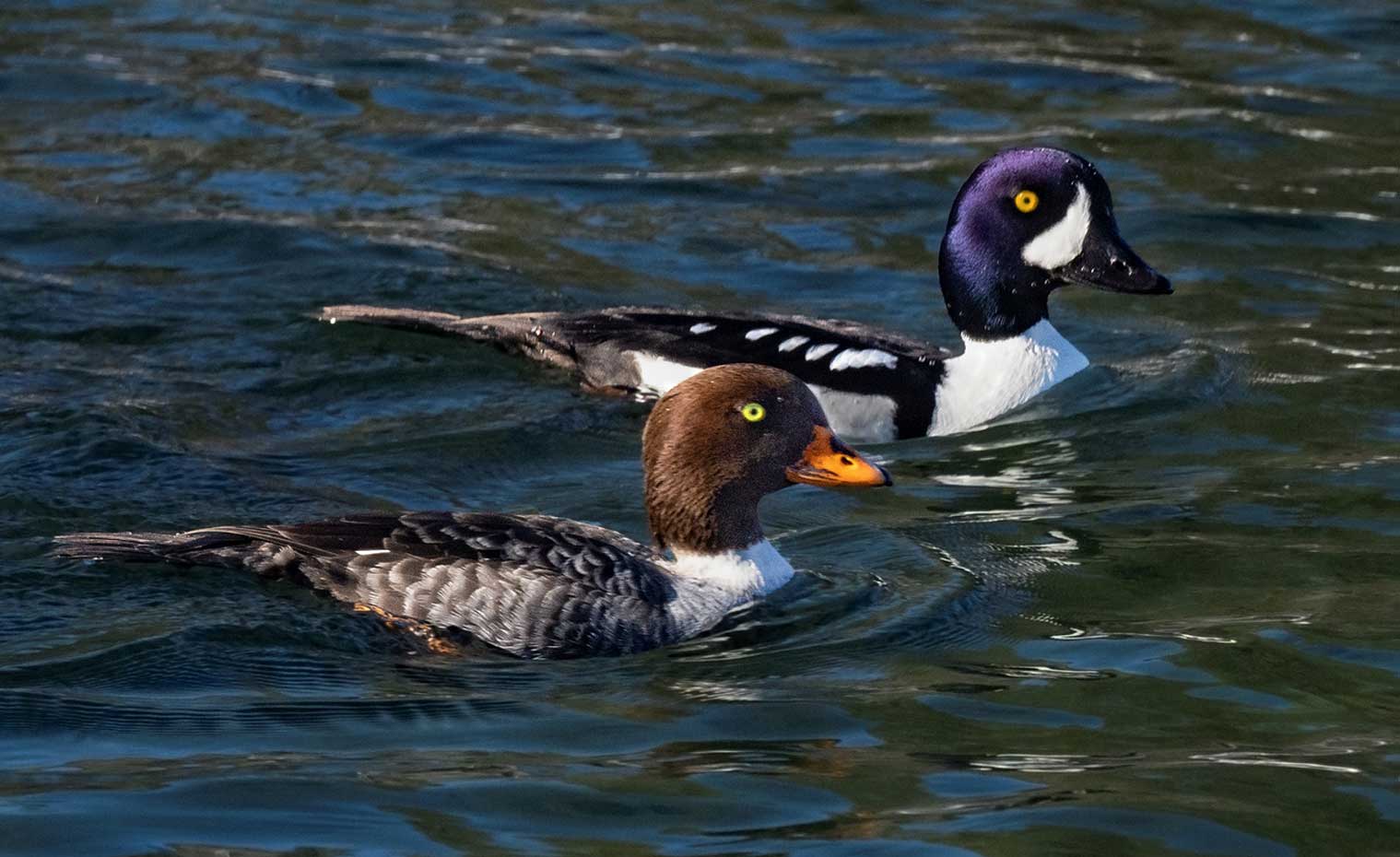 The Barrow’s Goldeneye is an especially striking, dapper duck. The male has an almost tuxedo appearance, with contrasting black and white areas. In the sunlight the dark iridescent purple of its head, with a white crescent between its bill and eye, is stunning. The very different female has a cinnamon colored head, grayish-brown back and wings, and small patches of white on their folded wings. The female bill is yellow, which helps separate it from the nearly identical Common Goldeneye female, which has a dark bill.

Gregarious in winter, Barrow’s Goldeneye form rafts, motoring in the calm waters of a lake or river, often mixed in with the similar Common Goldeneye duck.

In December, January, and especially February, animated males warm up their mating ritual by looking up and nearly touching their heads to their backs. Then they make a loud cricket-like chirp.

Barrow’s Goldeneye dive for crustaceans or invertebrates in lakes, or rivers. Watch them “shoot the rapids” in the Link River then paddle hurriedly against the current to try it again. Putnam’s Point and the Main Street Bridge are two locations where you see larger groups. At Veteran’s Park boat launch, find them mixing with other ducks on Lake Ewauna.

Late afternoon is the best time to see the deep purple color of the males. Early morning or before sundown is when you’ll hear their wings whistle overhead.

They disperse to higher elevation lakes by late spring where they nest in a tree cavity. Ducklings then leap out and follow their mom to the water. Davis Lake in northern Klamath County is one such lake.

Yes, winter may seem drab, but once you see a male Barrow’s Goldeneye, it definitely adds some color to the day.

Darrel Samuels is president of the Klamath Basin Audubon Society, a birding guide, and a retired school teacher. He’s proudly drawn White-headed and Pileated Woodpeckers, a Sooty Grouse, and a Barred Owl into his yard.

Kevin Spencer has conducted point count bird surveys for almost 20 years and was involved in the creation of species accounts for the book “Birds of Oregon: A General Reference.” He has seen or heard 314 different species in the Klamath Basin.